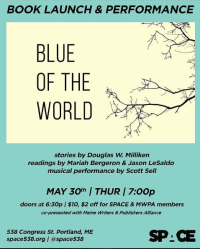 Today is chilly but I’m wearing shorts and keeping my windows open because I have faith in the progression of time. Everything smells like lilacs and convolaria. My cat’s right ear mysteriously has a bald spot. In two days, Blue of the World will be publicly celebrated. Apollo Brown’s version of 12 Reason to Die might be better than Adrian Younge’s. These are the last days of May.

While I tick down the minutes until the event unfolds, I’m reminded that there’s a world outside that of my book, a world in which I take part and which takes part in me. For example: my short story “A Means of Forgetting” recently took second place in Glimmer Train‘s final Fiction Open. For example: Glimmer Train also, simultaneous to the announcement of the Fiction Open winners, published my essay “This Twisted Labyrinth of Self” in their monthly bulletin, wherein I express my gratitude and contrition to a dead hero. For example: the Lascaux Review published the title story to Blue of the World in their newest anthology, The Lascaux Prize Vol. 5. For example: I will be giving a reading at the Springvale Public Library on July 19th (1 pm) then later taking part in the 15th annual Books in Boothbay festival on July 27th with hopefully more events happening between now and then. Plus all the other aspects of writing that have nothing to do with the public: reading the same sentence for the 10,000th time and still finding room for improvement, driving down Route 9 while meditating absently about a story that has remained unwritten for three years and suddenly realizing a way inside the narrative, digging holes and planting artemisia shoots and cuttings of buddleia and dense rootballs of fothergilla and magnolia because sometimes writing means losing yourself in the dirt, cooking chicken marinated in vinegar and soy over an open fire so my partner can have some dinner, vacuuming the floor, touching foreheads with the dog.

Anyway. For those in southern Maine, I will be overjoyed to see you at the event this Thursday at SPACE (7 pm, doors at 6:30). For those beyond the sphere of realistic travel, consider ordering the book through Indiebound (which is a way to also support your local bookstore), Amazon (where you can leave kind words that apparently effect the likelihood of future sales), or Barnes & Noble (which is Barnes & Noble).

And now: a video of me softly predicting rain.

(sound on) THURSDAY, MAY 30 at 7 PM @space538 marks the release of my new full-length collection, Blue of the World, featuring a multidisciplinary performance recreating the book’s atmospheric tension, with readings by Mariah Bergeron and Jason Lesaldo (@therealkwisatzhaderach ), music by Scott Sell (@scottasell ), a *special guest appearance by Genevieve Johnson!!!* (@gvcjohnson), and interactive sound-objects. Co-hosted by @mainewriters207 and @print.bookstore . . . #blueoftheworld , #solveitmyself