“There are only two kinds of work,” a co-worker at the apple orchard likes to say. “Too much and not enough.” This past month has done nothing but prove my buddy’s point. Two days after the release of my new collection of stories, Cream River, an essay discussing the surprisingly difficult genesis of that book was featured in Glimmer Train’s monthly bulletin. That essay, “A Weapon or a Crutch” caused for itself a bit of a stir: it was amazing to receive so many supportive emails from strangers who had experienced similar battles with depression, anxiety, and alcoholism. This particular whirlwind of interest culminated in a shout out in Jane Friedman’s blog, both a huge honor and an honest surprise. My worry all along had been that such frank discussion of my long-standing mental health issues would come off as alienating and sound like little more than an overly-confessional pity-party. I’m happy, once again, to have been wrong. 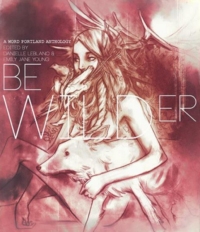 Meanwhile, the Word Portland monthly reading series released a new anthology featuring the work of over a dozen of its past contributors. The book, Be Wilder, is a truly beautiful collection of stories, poems, essays, and drama. I’m pleased and flattered that my short fiction “The Happiest Place on Earth”—a story of family, house fires, and STDs—is a part of such a gorgeous anthology.

And now, with the multimedia freak-out Do Not Pump Gas in the Presence of My Corpse—a live NPilar event in celebration of Cream River—approaching creepily on the horizon, the online journal Switchback (who

previously published my story “Eyetooth”) has just today released my story “Toledo” in their broody 22nd Issue. Which means there are now two books you can buy and two stories you can read for free, both fiction and non-fiction, not to mention a new record and one or two disconcerting new video pieces, all coming out in less than a month. I’m hitting all my bases. All my bases are hitting me back.

This is all way too much. But it more than makes up for this past summer’s long dry spell. I’ll be grateful while it lasts. I’ll be humble when the wave crashes and recedes.