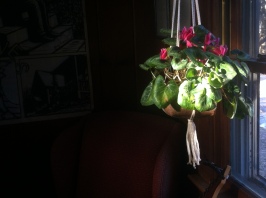 As much as I’m enjoying this monthly and ever-changing list of influential things (be they global as an inadequate world leader or as proximate as a buddy’s excellent garage band), circumstances dictate that I break from the routine for a month or two. There are multiple reasons for this hiatus, but the one of most pressing and distracting concern has had to do with housing. Barely three weeks ago, my partner, Genevieve, and I found out that we were being soft-evicted so that the current owner of our home could sell it. We responded by making her a more than generous offer on the house, but with dollar signs flashing in her eyes, she turned us down in hopes of a bigger payoff. So our hidden swamp-side haven among pines—complete with trickling asbestos and frogs swimming in the basement mire—will soon be some other dingbat’s problem to solve.

It’s a particularly acute ache to lose your home, especially when it’s due to someone else’s uninspired greed. But that ache has been tempered to no small degree by a rapid change in fortune, as Genevieve and I are under contract to buy a startlingly awesome house. With my infrequent employment and uninterest in possessions, never have I anticipated actual homeownership. Yet all signs indicate that the next phase of my life will be lived in the quiet lawn-sprinkler whack of suburbia. I’ll take it.

As you can imagine, my heart and brain are in a totally justified state of flux: beyond an animal need to shelter myself and my weird little family, what’s driving my day to day actions is a mystery even to me. With that in mind, I am subbing out this month’s list of influential things with a draft from my full-length collection Blue of the World, forthcoming in the relatively-near future with Tailwinds Press. The piece, “Under the Wing,” has never previously been published and acts as the first in a sequence of four stories following Cuth’s grim passion. This might also be the oldest piece in the collection, which translates into a certain specific sense of relief for this long-nurtured orphan having finally found a good home.

Before sending you off into Cuth’s incapable hands, I’d like to thank you for reading, for sharing, and for your constant reminder as to why I do what I do. If you are a current Patreon subscriber, thank you for buoying my confidence over these past several months. If you are not a current Patreon subscriber, please feel free and, in fact, encouraged, to vicariously buy me a recurrent re-esteeming sandwich by becoming a member today. And if your view of the future looks far too thermonuclear for any kind of subscription, consider making a one-time donation and getting the equivalent rewards (handmade things, small-run booklets, etc.) for one month.

You are the pony to my pasture.

After all the ugliness at the office over the politics of haircuts and presentability and how he ultimately loses his job, Cuthbert has to make a few stops—the after-school program where he volunteers, the hardware store—before going home. It strikes him as funny while he navigates his city’s streets, avoiding traffic and dodging pedestrians, that he should be in any sort of hurry. Does he not suddenly have all the free time he could possibly want? Cut loose from the obligations and responsibilities of work, is he not now free to pursue the remains of his life at a rate he enjoys and prefers? He’d even emptied his desk in a rush. Why wait? He resigns in person at the end of his session at the after-school program, then buys a length of rope and drives home.

The house Cuth rents is on the edge of a neighborhood of simple but sturdy houses, timber-frames and stone-foundations. Not so much the suburbs as what the suburbs reached to envelop. The sort of homes one would be more likely find far out in the country, not just a few dozen blocks from town hall and the county courthouse. Beautiful old houses all done up with manicured yards. Tall trees and tire swings. Forsythia hedges ready to bloom. Cuth’s place is at the end of a cul-de-sac: though the road continues on as a gravel scratch through some scrub and pines into a meadow strung up in high-voltage lines—the sort of ephemeral road used by the municipality for maintenance purposes alone—as far as Cuth or anyone else is concerned, this is the end of the line. Parking his car and gathering his rope—breathing in the ripe early-spring air—Cuth stands in the cool stirring of last fall’s leaves and new birds flitting among the bushes, among the trees, small piercing songs lacing through the afternoon’s diminishing blue light. Then he mounts the porch stairs and steps inside.

This is the sort of place where a family is meant to live. Big kitchen. Big den. An upstairs full of bedrooms. An attic to store old toys, old clothes, an extra bed, an extra kid or cousin. If his sister and her daughter ever came down to visit, this would be perfect. They could stay forever and he’d never know. Somehow, they’ve never made the trip. The kitchen has two cast-iron skillets and a single aluminum pot for boiling water, a couple plates and knives and a ticking refrigerator, mostly empty. The den has a chair and an end table next to the chair and on the table: a book. Unread. Upstairs is a room with a typewriter perched on a stool. In another, a guitar leans against a folding metal chair. It has never struck Cuth as odd that he lives alone in such a huge empty space. A cathedral or a tomb. It has never struck him as odd that he’d want to.

In the back half of the house is what Cuth assumes an architect would call the Great Room. Large fireplace gone mostly unused. A bank of windows overlooking the back lawn and, beyond that, a dense stand of maple and birch. A ceiling vaulting high enough to create a sort of balcony or overlook of the second story’s hall. Forming an X above everything, two heavy rough-sawn beams span the air to intersect and where they do, a large glass globe of lamp hangs from a chain. But Cuth’s not interested in the light. It’s those girders he’s got his eyes on.

It takes a few attempts to toss the rope up and over the intersecting beams. Everything else follows with the ease of muscle memory: he’s always been good with knots. He secures the rope to the X above by means of a simple gliding bowline. He drags a chair in from the den and, on tiptoes, installs a classic 13-loop noose. Cuts the extra rope with a kitchen knife. Arranges his neck into the noose. He conducts these tasks with a sort of detached ambivalence. Efficiently, he is getting the work done. He plays with how teetery the chair is: pretty teetery. Then he just stands for a moment and stares out the bank of windows surrounding his cold fireplace. Grass, greening from grey. Bright buds on the tips of branches. The movement of birds. No regret or sorrow, no bitterness fluttering in his heart. Just the vague sense that it’s all a waste. The white and purple splashes of crocuses sown wild throughout the yard. All of it’s wasted on him.

“Not too bad,” he says, and starts to tip over his chair, but in his pocket, his cellphone rings. Vibrates, actually, and chimes an electronic tinkling. He forgot to turn it off.

But it’s Lindsay calling. The girl who manages the food co-op. Woman, really. Dark hair always dusted in a fine spray of flour. A baker. Always looking tired but also happy, maybe giddy with the weight of her exhaustion, most likely having been baking bread since long before the sun claimed the sky. He wonders if she’s calling about his volunteer shift. Or perhaps he has a balance on his account. A minor debt unpaid. Pretty Lindsay with flour in her hair. Cuth flips open his phone and says hello.

Cuthbert looks down at himself standing atop his chair at the center of the room, strung to the girders, and shrugs. “I’m fine. Yourself?”

They talk for a few minutes. He precarious with the rope around his neck. She probably in her kitchen. Drinking tea. Flour in her hair. When he hangs up, they’ve made plans to meet for dinner in an hour.

It’s hard work loosening the noose. Cuth puts the chair away in the den and goes upstairs to shower. He leaves the rope right where it is.

The restaurant where they meet is a sushi place where the customers all kneel at abbreviated tables, hanging lamps wrapped in brittle painted paper. Cuth is surprised at how comfortable he is on his knees. They eat small pieces of fish and drink hot sake and green tea, and they talk. She’s a good talker. A good listener, too. He had not expected someone who works with her hands in the dark quiet hours of morning to know what a voice is for. He’s glad that she does. It makes it easier to maintain his quiet with her. Later, over small bowls of ginger ice cream, she asks him what the most incredible moment of his day had been—“What gave you pause, made you sit up and take notice of your life?”—and he has to admit, it’s a pretty good question.

“After I was done work today,” he says, looking off vaguely past her, above her head and to the right, “I stopped at the place where I volunteer. It’s a program for grieving children. Kids who’ve lost their parents. Mostly you just act as a friendly adult, you know, very casual, just make them feel safe and comfortable. So I was drawing pictures with this one little girl, and she’s drawing a little horsy in pink and purple crayons, and when she’s done she holds it up to me and says, ‘Look, this is the mommy.’”

“Then she ripped the picture in half and said, ‘And this is the baby.’”

“I guess that was pretty good.”

Throughout the restaurant, since before they arrived, there’s been music softly playing. Like mournful birds in the rushes alongside some barely rippling pool. Songs older than sound. After a moment, Lindsay asks, “What were you drawing?”

And his answer: “Carrots.” He scrapes his spoon along the empty bottom of his bowl. “Tons of them.”

But later that night, while lying awake beside Lindsay in her warm bed, in her warm blankets and clean sheets and the clean scent of laundry and hair and girl, it’s not the horsy he thinks of but his view from the noose. Greens and grays and splashes of purple, splashes of white. The tall naked trunks of trees and whatever lies beyond. All of it wasted on him. Hiding just behind his closing eyes. It’s what he will think of every night that he lies beside her, every night for six more months until once again he sleeps alone and has lost what’s left of his hair to time or to incident and has no one to talk to anymore but that great X in the air of his home, unchanging and unrelenting, negating everything beneath its twin wings.