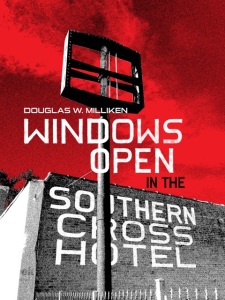 My personal essay, “Windows Open in the Southern Cross Hotel,” on the late songwriter Jason Molina (Songs: Ohia, Magnolia Electric Co., The Amalgamated Sons of Rest) is now available in Volume IX of Radio Silence, a San Fransisco-based journal dedicated to the crossroads of literature and rock & roll.

All indications were of a sinner testifying—not necessarily repenting but certainly under oath—before some silent power above. One that could save or damn him with the same disinterested stroke. Beyond the spotlight’s edge, the theater disappeared. There was no opening act and the room was mostly empty as Jason Molina played alone in a bright wash of white light.

The accompanying art is by Dan MacAdam, who not only designed many tour posters for Molina but in fact played on his seminal Magnolia Electric Co. record. Honor compounded upon honor.